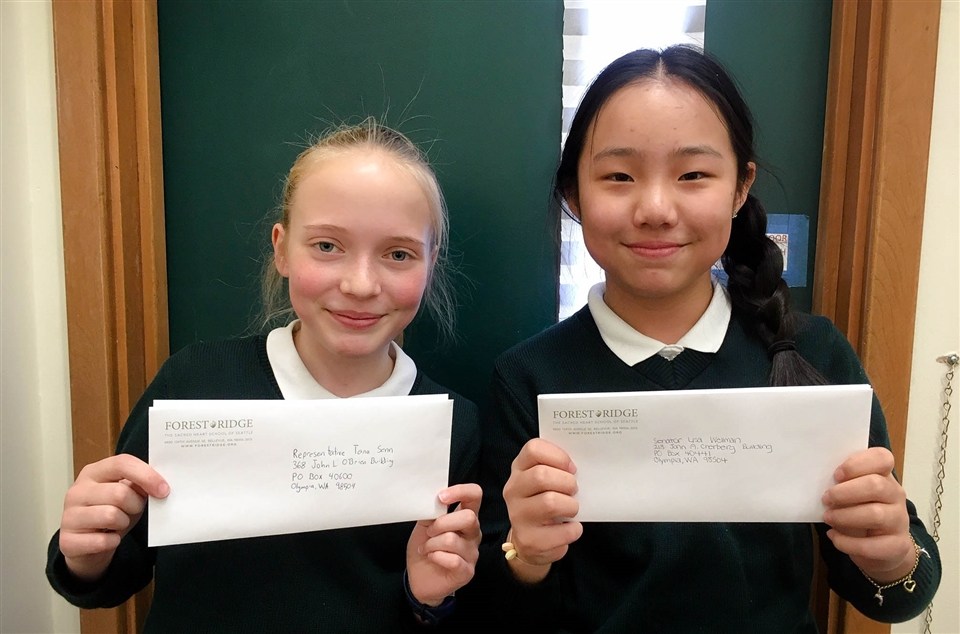 Advocacy in Practice
Shelley Levin
February 26, 2019
By Shelley Levin
Middle School Science Teacher
﻿February 27, 2019
In science, the 6th graders have been studying ecology through the case study of the Southern Resident orca population. This population, which lives locally year-round in the Salish Sea, is in decline due to boat disturbance, biomagnification of toxins like PCBs, and lack of their primary prey, Chinook salmon. After first studying this population and ecosystem as ecologists, the 6th graders put on their “advocate” hats to see what we can do to help our local orcas. Just like there are many factors contributing to the decline of this population, there are many ways to help. These efforts are often best organized and funded at a state level, so we went right to the source – contacting our state legislators to advocate for including investments for orcas in state budget currently being drafted. Each girl wrote a letter to the senator and representatives for her home district, incorporating skills from science, English, writing, and leadership in the process.
Here’s just one sample of the nearly 100 letters that will be mailed to Olympia this Friday!
Dear Senator Kuderer:
My name is Claire and I am writing to advocate for including Governor Inslee's proposed $363 million for salmon recovery in the 2019-21 Washington state budget. I am a 6th grader at Forest Ridge School. In science class, we have learned that the Southern Resident orca population has decreased from 200 to 74 whales. The population is in decline because of lack of food, toxic chemicals and boat disturbances.
Budgeting funds for salmon recovery will help the orcas because they will always have enough to eat. In Governor Inslee’s 2018 budget policy brief, he proposed “$363 million in the capital budget for salmon recovery, culvert removal, water quality and water supply projects that will expand and improve salmon habitat across the state.” Salmon are often unable to spawn and die because of poor water quality or harvest rates. This is affecting the orcas decline because Chinook salmon are orca’s primary prey. When orcas don’t have enough to eat, they have to burn their stored fat which is where PCBs are stored. This releases the toxins to the rest of the body, and the effects of the PCBs are even worse than before. These effects are increased mother and calf births, higher risk of disease and reproduction issues. Fixing the salmon population would make it so that orcas do not have to burn their stored fat. I sincerely hope you will consider voting for funds for salmon recovery in the 2019-2021 Washington state budget.
Sincerely,
Claire