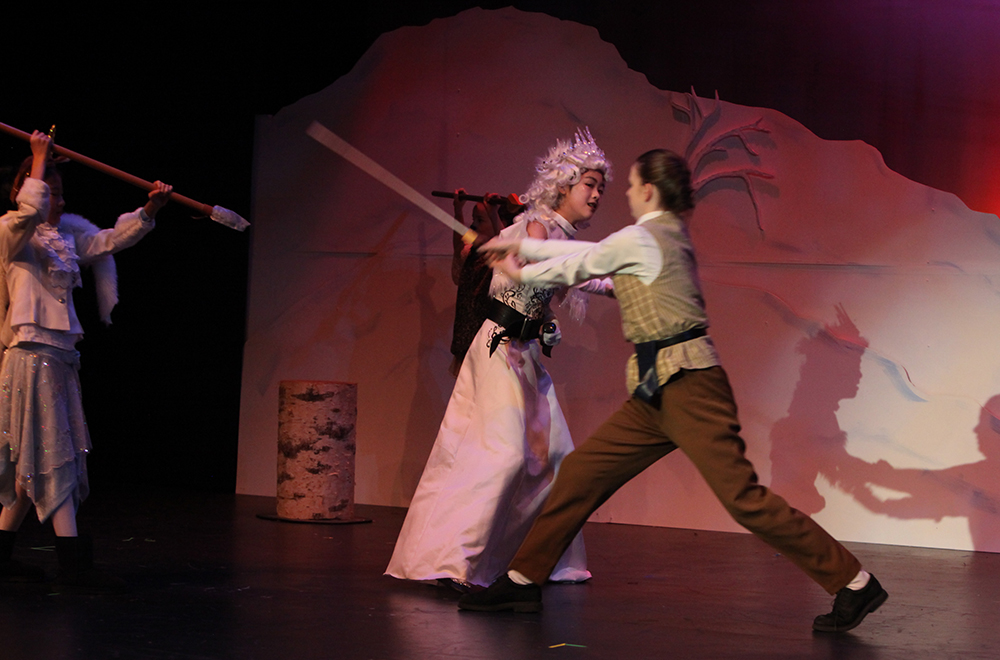 Taking Risks On Stage
Ginny Schreiber
April 23, 2019
By Ginny Schreiber
Middle School Drama
April 23, 2019
I think that it is important for my drama students to see me take creative risks, because I often ask them to push themselves out of their comfort zones. So this fall, I decided that it would be an unique opportunity – albeit a challenge – if our middle school actors were given the chance to work with a certified stage combatant to do some of the fight scenes we would perform in “The Lion, the Witch, and the Wardrobe.” There were two different moments in the play that I needed to stage: the fight sequence between Peter and Fenris Ulf; and the large battle between Aslan and his followers versus the White Witch and her army. The challenge was the same for each scene (though the solutions would be unique): how was I going to have the battle between good and evil play itself out on the stage? And, how successful would my group of young actors be wielding swords, spears, and shields with little to no prior training?
It isn’t the norm for stage combat choreographers to work with middle schoolers (a very young age group), but our stage combatant, Jason Marr, and I decided we’d set the bar high and see what happened. In the beginning, each combat rehearsal began with my stomach filled with butterflies because I was operating (and directing) at the edge of my comfort zone. And soon, after a few weeks of learning technique and safety, they all began to get the hang of it. And they did great. Over ten rehearsal periods and about twenty hours of contact time, the girls learned a whole new vocabulary – such as “advance,” “retreat,” “prep,” and “parry” – as well as sword- and spear-wielding skills. They also had to learn the other important aspect of combat, which is sound. (There are two types of sounds that are generally utilized: one is making vocal reactions; and the other is a knap, or a percussive sound made by hitting a part of the body. The vocal sound-scape is an important element to the storytelling, and helps the action come to life.)
The cast and I grew a lot during our three months of rehearsal, and learned to fight safely, slowly (at about a 70% rate of speed), with balance, a safe distance, and confidence!